Climbing Mt. Vihren 2914m. It has become a bit of an annual thing for Di and I to climb an alpine route on Vihren.  We started off with Dzhamdzhiev Rid (pronounced Jamdjeiv rid)  Other than it being a long way the route is as basic as you want it to be. You can bypass the technical bits and just plod on up an steep faint trail. However if you follow the true ridge line there are some lovely technical rock climbing pitches and the odd bit of exposure. An explanation to the verbiage of climbing might be useful at this point. Exposure is  a technical term for scary, with lots of depth/space around you. Pitches are sections of the route with each pitch being the length of your rope, normally measuring 50m or 60m)

The technical pitches do require rope and some rock climbing experience. There is one point where you have to perch on a tiny ledge fingers gripping the top of the rock above you, depth plunging away below you, you reach around the end of the rock to some invisible hand hold and swing yourself up onto a saddle. Brown trousers time (technical climbing term again) and definitely not for the feint hearted! This route is very popular in the winter and has a bit of a reputation for trouble as people tend to underestimate it! Why people underestimate climbing routes in Pirin will become clear. 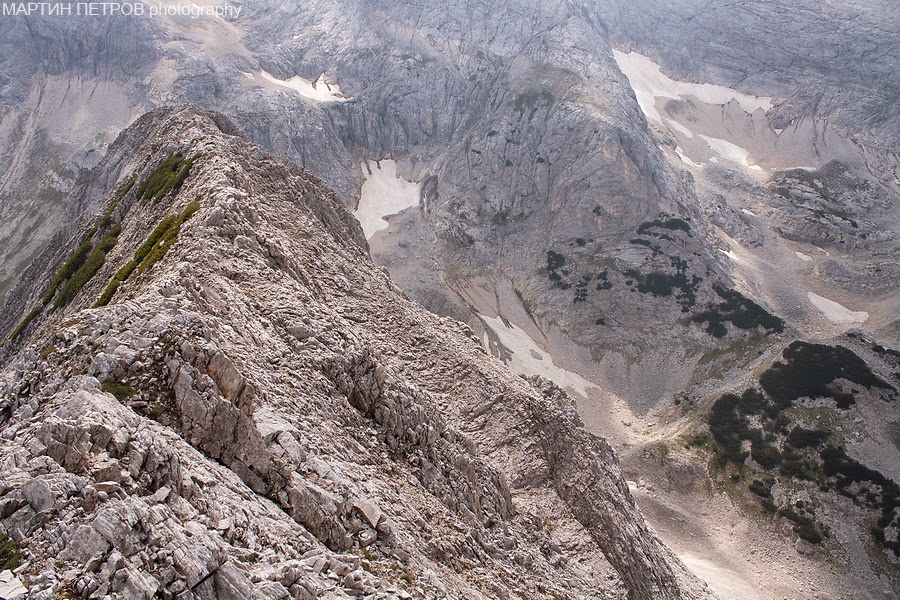 In 2013  we climbed Vihren 2914m via the Severen Greben route (route 11 on the image below) . In the topography guides we could find, this route was described as a little bit harder than Dzhamdzhiev Rid, (A LITTLE BIT!!!) but basically an easy beginners stroll across a field!!  Lots of rope work, lots of exposure and some proper climbing.  I counted 6 pitches. The top section was a real joy as we ended up climbing through a huge rock garden filled with Edelweiss . This little hardy alpine flower is a favourite of mountaineers. They only grow in truly wild  spots in steep rock faces and invariably appear when you are at your most shaken! . All in all a scary day with some proper climbing. However, said day was described as “a little bit” harder than Dzhamdzhiev Rid!

Well this year our Climbing Mt Vihren 2914m trip was up Route 6 on the picture above. The Guide describes it thus:-

” Gully that separates the left side of the north face (triangle) on the right (funnel). Lightpath that is of interest primarily in winter. Some of the routes on the triangle out of the left edge of the sidelines and continue on it. For now just know the first winter climb – on April 14, 1952 by Encho Petkov and six mountaineers.”

A better translation of “lightpath” would be “easy route” Oh the joy that is Bulgarian Understatement, Mountaineers Understatement, Climbing Understatement. To make it really really clear THAT AINT NO EASY ROUTE!  O.k. in the winter when everything is full of snow and all the rock is frozen to the hill, it might be a little easier but you are still hanging off a vertical cliff, hundreds of meters up in the  air with nothing below you but certain death.

In the summer everything is exposed as its true self. A pile of shattered rock slide waiting to happen. A gutter filled with unstable, broken, horror held together with bird spit and balance. Looking at the picture you will get a pretty good idea of the route. You follow the vertical chimney up from the snow field until you hit the shelf that angles up to the left. The bulk of the climbing is going to be in the chimney and then a gentle scramble up the shelf. To be fair to you, the guide books agree, they claim the bulk of the climbing is in the chimney. They don’t even mention the shelf!

So up we went and for 4 pitches we muddled our way up the chimney, tough but nothing too unbearable as it’s not too long. I knew once we’d finished with the chimney the exit would be easy. ERROR! You guessed wrong, I guessed wrong, the guides were way way way wrong. The chimney is the easy bit. The shelf turns out to be a nightmare. We left the chimney behind and set off into what would turn out to be a pretty sustained climb (sustained being a technical climbers term for f-ing difficult, relentless and death defying).

The shelf is nothing of the sort, it is a very steep gutter. Sheer rock walls on either side offer little in the way of holds or places to attach safety equipment (protection in climber language). The floor of the gully is just rubble, smashed rock that has fallen in over the years, precariously balanced and just waiting for something to nudge it down the hill.

The shelf rises up in steps, 10 meters of steeply climbing gutter, filled with rock slide waiting to happen, ends at a 4, 5, or 6 meter high wall. These walls are mostly vertical and pretty technical. Some were over hanging and very technical. So we settled into a bit of a routine. Di would lead as far as he could. When he found a safe spot to belay me up to him I would climb up and then I would belay him as he climbed higher. At every moment bits of gully would slip and crash down into the depths below. I tried to only step on solid rock and then wedge myself under something to protect myself from falling debris Di kicked down.

Unfortunately there is very little solid rock in the gutter and sometimes nothing was solid. At these moments we would try and “Be The Mouse” tread lightly and disturb nothing. Even with all this caution and the constant pounding awareness that a mistake would kill us both, it was standing totally still the mountain that got me. Wedged in under a big overhang to protect myself from falling debris I was belaying Di when the gully floor started moving. Slowly enough to give me a chance to throw a leg up against the opposite wall of the gully and brace my back against the wall behind me.  Steadily the slow slide of rocks turned into a rapid crash, landing on and pulling away the coils of rope below me. Nothing caught on the rope but watching it slowly uncoil down the hill inside a wave of rubble was a terrifying moment. I eventually retrieved the rope from what was once the floor.

Meanwhile above me Di was struggling with a similar problem, there was no way for him to get up except through some unstable boulders that moved every time he touched them. The safe route was over an overhanging boulder but not an option with a left leg that does not bend. Slowly, carefully barely touching the ground he inched round the trap and onto solid rock.

Still wedged, muscles screaming I waited what must have been only a few minutes but for what  felt like hours until Di got somewhere safe. I hauled my way up to the overhanging rock. I’m not a rock climber, even in the depths of bar craptalk I wouldn’t claim to be much of a mountaineer but the next 4 meters were proper rock climbing. I tried to go round as Di had, but once again what looked solid wasn’t and the world just dropped away below me. With no plan B I had to go on.

Weirdly when I am about to die I get very calm, everything slows down, the moves became obvious, the options focused, crystallised. I could not go back so one leg  had to go here, the other as far as it would go over there. Both hands up onto that big rock , pulling all my weight onto my hands meant I could get my right leg much higher. Right hand up onto that little pimple. Push, pull, heave and Up I went.

On and On the gully climbed, it got narrower and steeper. We got so tight under the rocks we had to take our rucksacks off and haul them up on the rope as we just didn’t fit. At one point we were in a tiny tunnel full of shitty broken rock and nothing to hold onto. I’m not embarrassed to say it fear finally gripped me and I froze. I was above Di, trying to find a spot to belay him from and I just couldn’t do it any more. I wanted to see the rope above me, I wanted to be sure that I was safe and the rope just wasn’t there. Looking down all I could see was clear air all the way to the snow field at the bottom. I tied myself to something and Di climbed past me.  Things got a bit better after that but not much. There were still some moments where I climbed better than I ever thought I could. I did moves that a fat coach potato  really shouldn’t be able to. Finally the slope started to level out and the rock floor started to become stable rock.

I counted 8 pitches that were sustained technical rock climbing. Maybe another 8 that were just climbing. It took us 6 hours of near constant climbing most of which was spent in the sure knowledge that the ground could slip out from under us at any moment.