The Davies, Route 10. It is certainly possible to do this circuit in a single day, We would recommend an over night stay and the beautifully situated but basic Sinanitsa hut. There are 4 possible approaches to the hut:-

The Davies, Route 10. From Vihren hut follow the gentle and well marked yellow trail up the valley to Muratovo lake, in early summer this valley is full of wild flowers, an alpine paradise!  From the lake you will be off the marked trail but the path is relatively clear and easy to follow.

Circle the beautiful little lake until you reach the inlet stream to the west. The stream emerges from a gully filled with boulders. Follow the faint track up the right hand side of these boulders. Near the top the going gets a little steep but not difficult. You will emerge onto the ridge which offers a great view of Vlahinski lakes and #21 Gredaro. From the ridge pick your way down through boulders and rough ground heading for the obvious pass between Gredaro and Muratov. There are some cairns and a faint trail but it is a case of hike and hope rather than following a clear path! 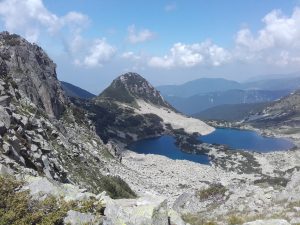 From the pass there is a wonderful view of the Gergiyski lakes. This valley is rarely visited and a pristine little kingdom of wild alpine meadows.  The “path” passes between the two largest lakes and then south west between a fine rocky peak and the main Georgiytsa ridge line. Again there are some cairns and a faint trail. Keep SW under the magnificent rocky structures of Georgyitsa peak which you will climb tomorrow.

Turn west over lots of boulders as you reach the sharp rocky NW ridge of Georgyitsa. Once you have passed this ridge turn back sharply to the SE. Contour around the curves of Georgyitsa and then head almost straight south descending into the bowl shaped valley with two tiny lakes (sometimes they are dry). Climb up about 50m through rocks and a steep klek filled path that traverses to the west. From here you drop down onto the marked trail to the hut.  This last section feels a lot longer than the description but keep your bearings and push on and you will reach the path eventually!The hut is sheltered beneath the impressive cliffs of Sinanitsa in mixed country of meadows and klek, Sinanitsa lake is pretty and inviting but the water is very very cold! Swimming is only for the brave as it sees little sunshine. Di suggests a lazy start as the return journey isn’t arduous. I prefer to leave early and then take my time on the beautiful summits of the return. 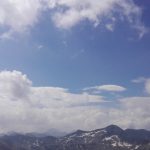 Descend the ridge line steeply down to the south and then east. Just above the pass you will cross Momin Vrah which doesn’t quite scrape into the Davies at only 2480m.  From Momin Vrah descend steeply through the rocks to Sinanitsa porta. From the porta the main blue trail to Vihren hut traverses almost flat beneath the ridge line. Ascend the broad stony ridge line NNE  towards the unnamed peak #25 2520m.  From the summit keep along the ridge line NNE descending through boulders and then rocks, diverting off the true ridge where you have to. There is a rocky saddle between #25 and Georgiytsa. Ascend again NNE to the summit at 2598m.

The ridge swings NE and then E after about 1.5km you reach #22 Bim at 2560m. Descend ENE over easy ground to join the main path before Banderishka porta.  Rest at the pass before you descend again to Vihren hut.

Allow 6 hours for each day.  The return route is dry so make sure you bring lots of water. 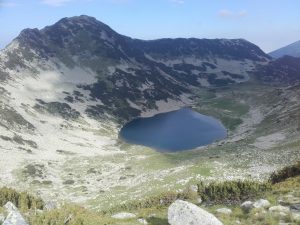